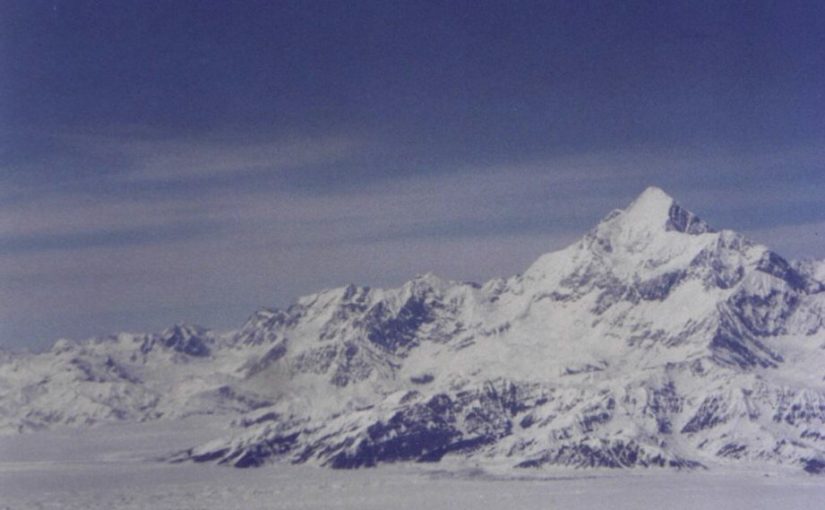 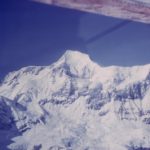 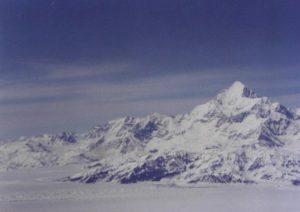 Bobby Dery’s idea. Eff Denali and pick something slightly off the beaten path. OK, Rich Rinaldi and I are game for it. So we trained and geared up for it and headed out for some hard fun.

Our first bivy spot: Gulf Air Taxi’s hanger in Yakutat, Alaska. Rich and Jeff riding out the first of many waves of foul weather. We spent the first three days slumming it until the weather broke sufficiently to allow a flight to our base camp. 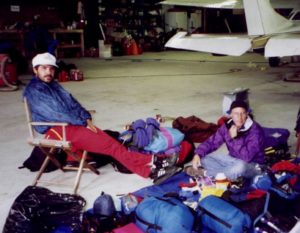 Finally, good weather for flying into basecamp. Kurt, our Gulf Air Taxi pilot, set us down at a nice landing spot at around the 3000 foot level to establish base camp. Once down, as long as our Cessna 185 was moving, everything was fine. However, slowing down to turn around and unload provided some excitement as the aircraft’s landing skis broke through the soft upper crust of snow (and no, it ain’t camera tilt). 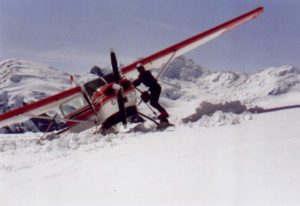 After we dug out Kurt’s Cessna and setup our base camp, another wave of stormy weather hit. Fortunately we had some intellectual reading material to keep our eager minds occupied until the next break in the weather would allow us to begin carrying loads to the base of the route. 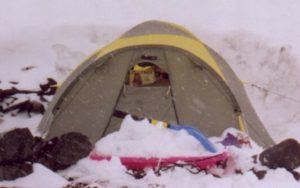 Break in the weather. Time to mule loads to Camp 1 at the base of the “Shale Ridge”. Above the top of the snow field on a ridge at around 7000 ft. will become Camp 2.

From Camp 1 at the base of the Shale Ridge, we carried loads to a snow cave near the top of the ridge. From there we ascended the snow field to a plateau above the ridge to establish Camp 2. 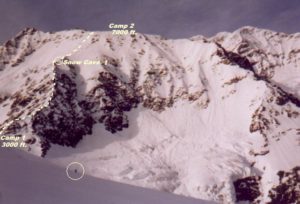 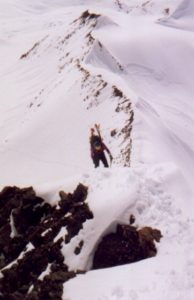 Having made it to the plateau above the Shale Ridge, we commenced to building Camp 2: a walled fortress against the storms blowing in on us on a regular basis.

Enjoying the finished product: A well dug-in, guyed, 5 ft. snow wall protected tent, complete with kitchen. Only one problem with this design: what happens if it dumps snow non-stop for nine straight days and its blowing so hard that you can’t go out to shovel and even if you could go out and shovel, the snow accumulates faster than you can get rid of it? Answer coming later. 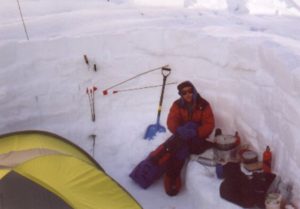 Advancing on the glaciated terrain above Camp 2. Once we’ve surmounted the crevassed lower section, our objective is to cross the bergschrund guarding a moderately steep snow slope, climb the slope and establish Camp 3 at around the 10,000 ft. level, shown rising above the roped leader in this photograph. 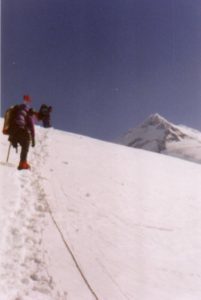 Two days in a row of excellent weather allowed us to reach and establish Camp 3 on a relatively small, snow covered ridge overlooked by Hayden Peak. The ridge leads to our next objective: Hayden Col and the base of a huge, steep, blue-ice plastered wall protecting a step beginning at 13,000 feet and South Ridge proper. 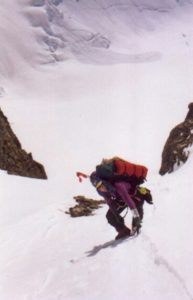 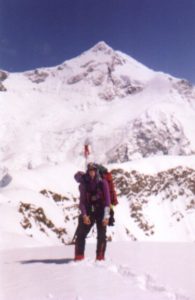 We were quite happy with our progress at this point especially as the weather seemed to be holding for a change. This (as it turns out) short period of stable weather allowed us to call in an air strike from the Gulf Air Taxi Air Force. In order to save ourselves the effort of even more load carries, we had arranged for an air drop of food and fuel, once we had reached this point. 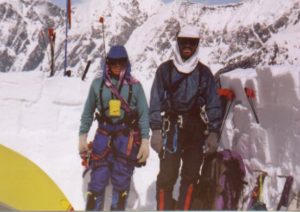 Some fancy low speed flying by Kurt! Flaps down, 100 feet off the deck and chugging along just above stall speed, the co-pilot dumps a box of food and fuel right on target. This was going to be our high altitude food and fuel which we would begin using once we had reached the South Ridge at 13,000 foot level. BTW: If you think this is cheating (and I suppose it is), consider that the next day, two guys from Colorado got dropped off at this spot in a Piper Super Cub (flown in one at a time), thus eliminating the entire grunt up from 3000 ft. base camp. 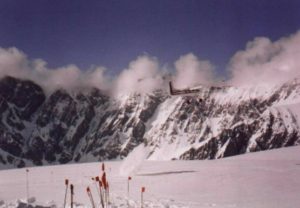 Our next move, despite deteriorating weather, was to carry and cache our high altitude food and fuel at the base of the wall below the South Ridge. To get there we had to cross a heavily crevassed area then traverse the lower snow slopes of Hayden Peak, an area we knew to be avalanche prone. We said hello to our Colorado neighbors who were busy trying to bomb-proof their tent, then set out towards the col. We moved slow, probing and wanding extensively through the crevass section, then began traversing the snow slope even as the weather continued to worsen. About halfway across the snow slope traverse, we decided to cache the food and fuel head back to Camp 3, hoping to return the next day, weather permitting. We never did see those Colorado boys again. Hope they got down all right. 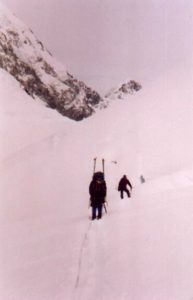 As you might’ve guessed, the weather never permitted us to return to the cache. In fact, for the next nine days we got mega-dumped at. That’s right, mega-dumped at. You get dumped on if it snows and the winds are below, say, 40 MPH. You mega-dumped at if you’re getting mega-dumped on and the wind velocity exceeds 40 MPH. The first three days were spent in our tent. We pretty much only came out to try to shovel snow and keep the tent from becoming entombed, as the snow block walls surrounding our tent slowly began to fill up and engulf the tent, inspite of our best efforts to keep it dug out. Shortly thereafter, we noticed the tent walls closing in on us. Not being keen to being buried alive, Bobby went outside to see what was up. Not waiting for Bobby to return with the bad news, Rich and I were putting on our one piece suits and preparing to abandon ship. Next thing you know is we’re all furiously digging a snow cave down into what was once one of the walls of our “fortress”. 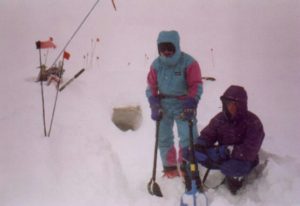 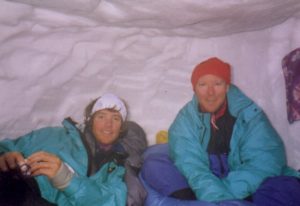 After many days living as Snow Hole Boys, Yakutat weather claimed there was going to be 24-48 hour lull (translation: only a partial white-out) to be followed by another supposedly bigger storm to follow. Well, not having enough food, fuel and patience to wait out another mega-dump, plus the fact that since our tent was trashed and we’d be living in holes for the rest the rest of the trip if we decided to continue, plus I’d be surprised if we could find our high altitude cache without getting avalanched off the snow slope, we decided to take the opportunity to bag up what was left of our kit and bust a move down the mountain.

Getting down wasn’t a cake walk. On the way up we had wanded the dicey sections with 4-foot wands. Trouble was, after the storm most of them were buried or otherwise vanished into the ether. We were in a massive hurry to exploit the break in the weather but not only were half the wands gone, every step down was a mini-avalanche. We stopped at camp 2 long enough to pack up some cached items and then rapped and plunged down the snow field above the Shale Ridge. This section was made even more fun when Rich’s pack yard-sailed down the lower part of the slope after it slipped out of his hands as he was attempting to stuff our rappel rope into it. Great. Last night on the mountain and we’re gonna be three boys sharing two pads and two sleeping bags. After finding and digging out the entrance to our snow cave on the Shale Ridge, Rich and Bobby went looking for the remains of Rich’s pack while I cooked up some dinner. About an hour and one burned-up dinner later, the brothers showed up with most of Rich’s stuff including his sleeping bag and pad! Yes, life is at least half good. 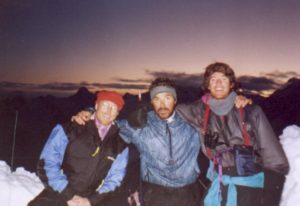 The next day, descending the remainder of the ridge took many hours of nerve racking down climbing on loose shale and unconsolidated snow. The final trudge in snowshoes through deep snow to finally reach base camp at the landing site was an exercise in controlled misery. Our radio worked just good enough to reach Gulf Air and convince Kurt to come and fly us out. Viewed from Yakutat, the weather over the mountain was marginal for flying. Kurt was game and so by late that evening, after two weeks on the mountain, we found ourselves showered, wolfing down dead cow and slugging cold brew at the Yakutat lodge. Thanks Kurt!