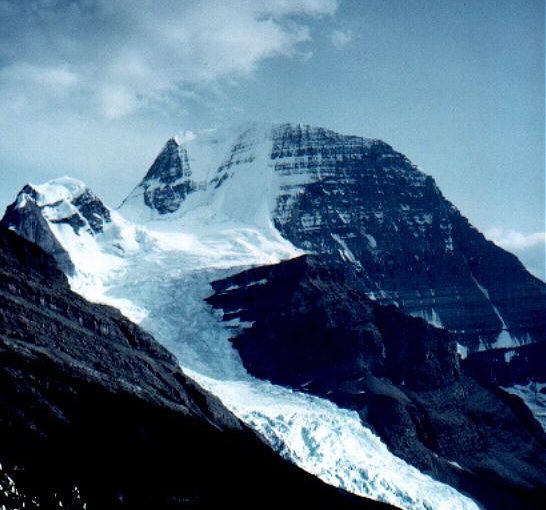 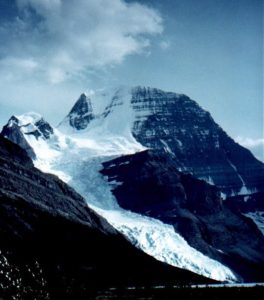 Go light and fast, that was the plan. Just like Rinehold Messner, Mark Twight and the rest of the Big Boys in the magazines. Once I had accepted the concept of a light alpine style ascent, our plan, conceived by my partner Tom Davis as we drove past Jasper, seemed totally logical, simple, even beautiful. Short and sweet. Bare climbing essentials. No sleeping bags, bivi sacks or insulite pads. Won’t need ’em. Because we won’t be bivying on snow. Because we’re doing it car to car in two days. One night on rock. Boom, do the face in a long day, then down to the Ralph Forster Hut that night. No bags, sacks or pads. Food for two days. Light, fast. Rack? We don’t need no stinking rack. Okay, eight Chounard screws, a few stoppers, a couple of pins and I made him bring a number one camalot and one deadman. Two long skinny ropes. Tools. Tent. That’s right, tent but no bags, sacks or pads. Miscellaneous items; Stove, fuel, pot (not spliff because you wouldn’t want to cross the border with it, besides neither of us ever inhaled), knife. Interesting concept now that I look back at. To this day, Tom swears we wouldn’t have gotten the job done carrying anymore than we actually took. Anyway, light alpine, that was our plan. So we bagged up our gear, filled out a voluntary registration form, stuffed it into the box, and were off.

Hiking in was pretty much according to the book until we reached the “gravel flats” past the campgrounds above Emperor Falls. From there the approach we took to get to the base of the climb differs considerably from that recommended in the various guide books, the reason being that the Robson River was running too fast and high to allow us to cross before Berg Lake (see route photo and our bivy spots marked “B”). We had to hike well past Berg Lake looking for a suitable crossing point. The best spot we could find did not appear too bad, but as Tom discovered, the water depth quickly went from ankle to above the gaiter to above the waist. Tom was nearly swept over as he crossed the cold, fast running water. After seeing this, I yelled across to Tom, “Game Over– I’m not crossing that” and “we’re fucked”. Tom yelled back calmly, “Well I’m not coming back” or something to that effect. So we stood there for a while, each on our own side, me trying to figure out how in the bloody hell I was going to get across and Tom trying to dry out and every now and again announcing that I should “go for it”. Yeah, right. I actually made several half-hearted attempts to cross, stopping just before the water theatened to swamp my gaiters. No way am I going up there with wet, sure to be frozen boot liners. Eventually we came up with a plan “B”. I would walk upstream to the source, the Robson Glacier, traverse over the toe of the glacier to the other side of the stream, follow it back down stream and link up with Tom. So much for the fast part of “light and fast”. 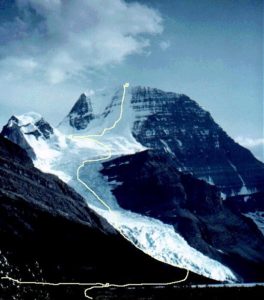 So we spent our first night far below where we wanted and expected to be but I felt that we had a lot to be thankful for. We were sleeping on dry, relatively warm ground in our tent, we still had food, my boot liners and feet were dry and the only stress we were feeling was to be one day behind schedule. All in all, an adventurous if not completely satisfying day.

The next day we began by slogging up talus skirting the lower Berg Glacier until we finally had to get on the glacier proper and begin negotiating the ice falls and crevasses blanketing Berg Glacier. The greater part of a day of slogging brought us to the Helmet-Robson col where we set up our tent in full view of the magnificent and intimidating North Face. Since we had no sleeping bags and no insulite pads, an early alpine start actually sounded good, and furthermore, looking at the size and nature of the face in front of us, we figured we’d need the earliest possible start in order to summit and still be able to make to the Ralph Forster Hut by the next night, as according to plan (plans are great– they give you something to look back on and laugh at). So we got up alpine-style and in the dark, began negotiating the final obstacles to the bergschrund. By first light we were above the ‘schrund and moving up the wall.

Low on the face, looking down on the gapers of Berg Glacier. Photo by Tom Davis.

Several hours after starting, we were well established on the wall and very optimistic of our chances at success. The weather was excellent: clear, yet cold enough to provide good purchase for crampons and tools, and to keep snow, ice and shale from raining down on us (mostly). We were making good progress thanks to Tom’s bold leading tactic: no intermediate screws for protection– he was virtually soloing each pitch (except that if he fell from way up, he’d probably also take me with him). We stopped only very briefly at each belay– just long enough for me clip into the anchor (usually three screws), sink my tools and clip into them, hand over my screws and put Tom on belay.

Tom Davis running it out on the vast North Face of Mt. Robson. Photo by Jeff Gorris.

Tom running it out on the infinite expanse of 50-60 degree face. Above loom the horizontal bands of shale. Some years, these bands are plastered by ice and snow (compare above photos to those in Sean Dougherty’s Selected Alpine Climbs in the Canadian Rockies). 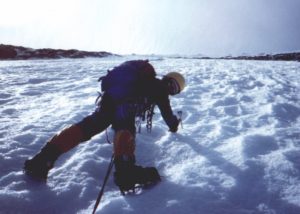 Appoaching the horizontal bands, Tom leads out. Tom found a thin, narrow ice passage through the shale bands although at the most narrow part, I could dry tool and hook for several moves. Somewhere past this area, we passed a place where some poor bastards had bivied by chopping a spot just big enough for two to sit with their legs hanging over the abyss. No fucking clue as to how they anchored themselves in. We saw that and said no eff-ing way are we stopping until we get to the top. Very faintly in the above photograph (and many many pitches higher), you can just make out the cornices guarding the finish. The Dougherty guide recommends bypassing the cornices by traversing up and right to reach the upper section of Emperor’s Ridge. By the time we reached the point where we needed to look for an escape, and with weather and daylight deteriorating, Tom decided to try going up and left (the classic “direct finish” I’d call it). We traversed about one and a half pitches left and fortunately found a gap up though a corniced area to the top. The traverse was quite scarey as we did not have adequate anchors at either end and a fall by either one of us would’ve been, well, catastrophic. We summited around 8:00pm in poor visibility and bivied at the top because we couldn’t see to get down. We used our ropes and backpacks for insulating pads and the tent fly was Tom’s sleeping bag. I could do nothing more than doze off for a few minutes at a time until I would wake up due to uncontrolled shivering where upon I would light the stove, melt snow and drink warm water. Thank the Almighty we didn’t run out of fuel for the stove. And I forgot to mention that at this point we were picking the crumbs out of our kits for food. To this day, I remember it as the longest, most miserable single night bivy I’ve ever inflicted upon myself. On the otherhand, I was damn glad to be on top and not sitting down on that ledge plugged into one of those butt holes suffering all night lower on down the wall.

On the summit snow cone. Life is good. Photo by Tom Davis.

Morning came slowly and with it, slightly overcast skies, but the little bit of sun coming through was greatly appreciated by my sorry self. Visibility was quite good so we took a couple of hero shots on the summit and began descending via the “Normal Route” hoping to find food at the Ralph Forster Hut. The descent to the hut was an epic in itself to say the least, but thanks to Tom’s intuition and some good luck, we made zero fatal route finding mistakes (like rapping off above the upper seracs into oblivion or getting rat-fucked on the horrendously loose shale ledges below the seracs). Once at the hut, we signed the hut register and cooked up the food we found there: little condiment packets of ketchup and relish and spaghetti noodles. You’re probably thinking, okay, so the food’s bad, you’re pretty much down– it only gets easier from here. Sitting in the hut at that moment slurping down rancid spaghetti noodles I probably would’ve agreed with you. Let’s just say that I’ll leave it to Tom to someday tell the rest of the story (and scan in the rest of the slides) but I’m seriously not bullshitting you, it involves lightning strikes, a forest fire, and at least one temporarily insane climber in plastic mountaineering boots running for dear life through burning brush. The drive from the provincial park back to Yosemite was mostly uneventful.

This adventure turned out to be one of the most serious, challenging, bold, nerve-racking, miserable, and yet totally rewarding I’ve ever signed on for. Trust me, if you ever feel the need to try this one, all I can say is you better have your shit screwed in straight or be lucky enough to have a partner like Tom Davis, otherwise you could find yourself mightily rat-fucked.